Boats gently knock together along the dock in Kelibia. The gentle melody of their wooden hulls colliding has been heard in this small Tunisian fishing village for decades. In the midday sun, fishermen feed scraps to stray cats in a scene that seems almost preserved in amber.

But the fishing trade is in its death throes here, as the pressures of the climate crisis impact on global fish stocks and put new social pressures on the fishermen themselves.

Kelibia is a picturesque fishing town of 52,000 where unspoilt white sandy beaches border the base of a 16th-century fort. When the town swells with summer visitors, its fishermen are part of the draw, untangling their nets each dawn to retrieve catches sold at blue-painted seafront restaurants by the afternoon. The town, where rich, fertile soil meets the sea, creating a spine of coastal industries that support local residents, is one of many similar ones along Tunisia’s Mediterranean coast.

Yet fishing is set to become an industry of the past. In 2018, Peter Thomson, the UN special envoy for the ocean, and Mukhisa Kituyi, the head of the UN Conference on Trade and Development pleaded for an end to fishing subsidies, citing evidence that 90% of the world’s fish stocks are now “fully exploited, overexploited or depleted”.

The dangers are all too apparent to fishermen at the dock in Kelibia, who have been forced further out to sea to spend longer on the deeper, roiling waters beyond their former routes in order to get the same catch. 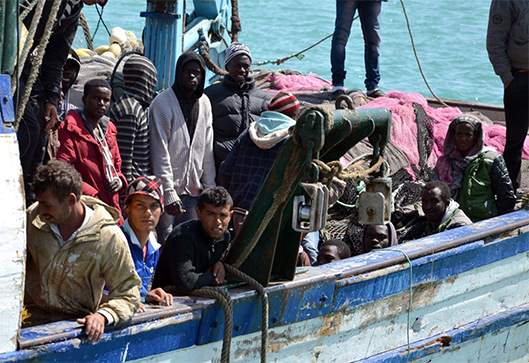 Tunisia’s fishermen regularly come across people trying to migrate across the Mediterranean.

“We used to have to go out between four and 10 miles to fish,” says Hassan, a 49-year-old fisherman who identifies himself only by his first name, as he untangles and repairs a huge net spread over the dockside. “Now we have to go further, maybe even up to 150 miles.”

Hassan explains that his six-person crew has to stay at sea longer. Over his 25 working years, a job that needed a single day on the waves has now turned into a longer and riskier commitment.

“Now we’re talking three or four days at sea,” he says. “Obviously, the further you go, the greater the danger from things like bad weather. Our last trip took us 60 miles out, for three days. There’s also more competition now, as it’s not like everyone sticks to their area – people come up from places like Sfax as the waters there are bad and the quality of the fish [has] decreased.”

Many are now looking for second jobs, like carpentry or teaching, hoping to bring in extra money. For some, smuggling goods or even people is an increasingly tempting option. Tunisia’s coastline, a short sail to Italian or Maltese waters, is part of a people-smuggling route that extends deep into the Sahel and beyond.

Fayal was reluctant to say whether he had ever witnessed smuggling, answering only that fishermen can choose to sell their boats to those looking to help migrants cross the waters to Sicily, Italy.

“The smugglers use the forest nearby, 10km away,” he says, explaining how they carry boats to the forest and depart from the nearby waters, attaching high-speed engines and driving with their lights off to avoid detection. Coastguards, he says, whose uniforms often mask cordial or even familial relations to the fishermen-turned-smugglers, can often be persuaded to turn a blind eye for the right price.

Fishermen who say they have rescued migrants in the Mediterranean have been accused of people-smuggling.

“There’s money in it. They wouldn’t say it, but if they can get money, they close their eyes,” he says, watching a fisherman throw a fish to a waiting cat on the dock. Gesturing at a small old white boat nearby, Fayal says that dozens are often squeezed into small fishing boats designed to hold just six. A ride can net the smuggler up to 6,000 dinar, he says – roughly £1,710.

In Zarzis, a fishing town in southern Tunisia, close to the Libyan border, fishermen have become an integral part of the rescue mission to aid sunken migrant boats they see while out at work. “We’ve had to become experienced in saving people,” says Anis Souei from the Tunisian Fishermen Association of Zarzis. Members of the association have also achieved a morbid kind of celebrity for giving corpses that became entangled in their nets dignified burials in the tiny Tunisian town.

Souei sighs as he discusses the consequences of their work, including a trial in Italy last year that accused six of his colleagues of aiding people smuggling after they helped migrants in distress. “In retribution … the Libyans said they’d prevent us from fishing in their waters,” he says. “Just because we publicly saved people.”

Along the coastline, the threat of the slow death of this way of life haunts the fishermen, who see fewer younger counterparts coming to join them. “As a way of making a living, this really is a dying industry,” says Fayal.