What is bonito in your mind?

Let’s display the bonito as below: 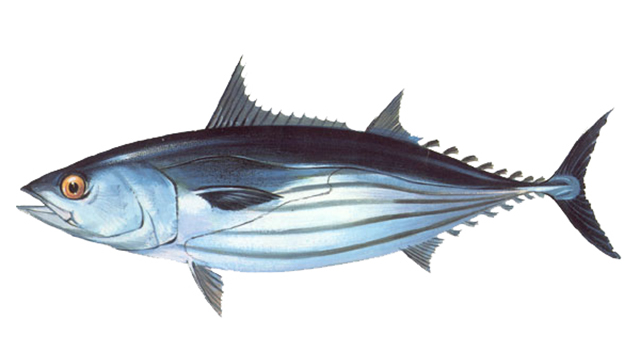 The skipjack tuna (Katsuwonus pelamis) is a  medium-sized perciform fish in the tuna family, Scombridae. It is otherwise known as the aku, skipjack tuna ,arctic bonito, mushmouth, striped tuna, Echter Bonito,White bonito,Striped bellied bonito,Okeanskij bonito or victor fish. It grows up to 1 m (3 ft) in length. It is a cosmopolitan pelagic fish found in tropical and warm-temperate waters. It is a very important species for fisheries.

Interpelvic process small and bifid. Body without scales except for the corselet and the lateral line. Swim bladder absent. The back is dark purplish blue, lower sides and belly silvery, with 4 to six very conspicuous longitudinal dark bands which in live specimens may appear as continuous lines of dark blotches.

Cosmopolitan in tropical and warm-temperate waters. Not found in the Black Sea. Highly migratory species, Annex I of the 1982 Convention on the Law of the Sea. 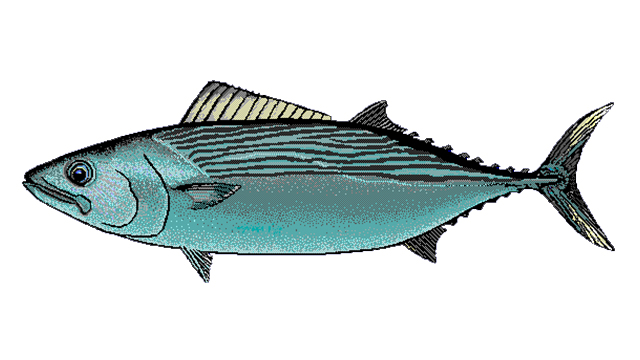 The striped bonito (Sarda orientalis) is a species of marine perciform fish. They have been recorded at lengths of 102 centimetres (40 in), though they are commonly no longer than 55 centimetres (22 in). Distributed through the Indo-Pacific and East Pacific, the striped bonito is known to occur at depths from 1 to 167 metres (3 ft 3 in to 547 ft 11 in).They are called mackerel bonito.

Indo-Pacific: widespread but with many gaps in its known distribution. Eastern Pacific: Hawaiian Islands and Pacific coast of USA to southern tip of Baja California and Tres Marias Islands extending to Cabo Blanco, Peru (especially during El Niño events), the Galapagos Islands and Gulf of Guayaquil. 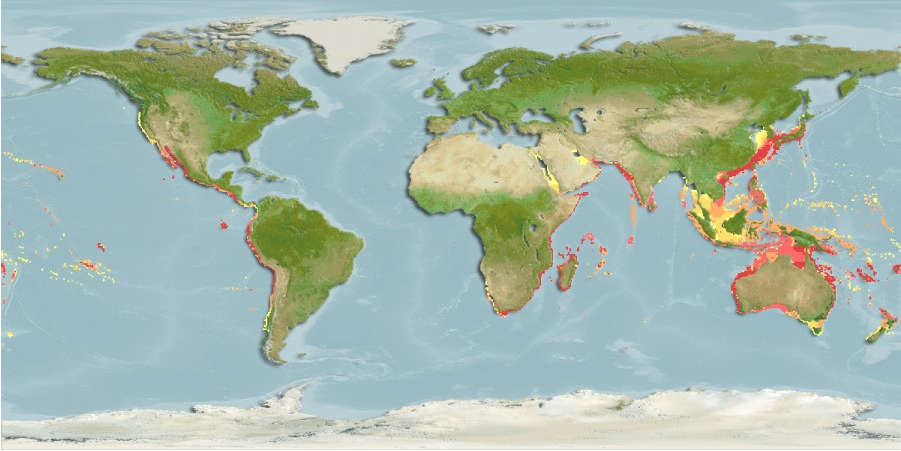 The Atlantic bonito (Sarda sarda) is a large mackerel-like fish of the family Scombridae. It is common in shallow waters of the Atlantic Ocean, the Mediterranean Sea, and the Black Sea, where it is an important commercial and game fish.

Eastern Atlantic: Oslo, Norway to Port Elizabeth, South Africa. Also known from the Mediterranean and Black Sea. Western Atlantic: Nova Scotia, Canada to Florida, USA and northern Gulf of Mexico; then from Colombia, Venezuela, and south of the Amazon River to northern Argentina; apparently absent from most of the Caribbean Sea. 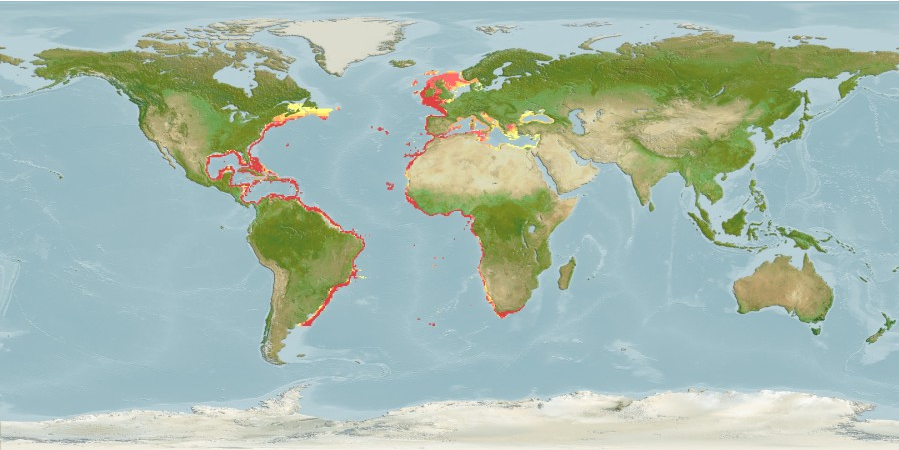 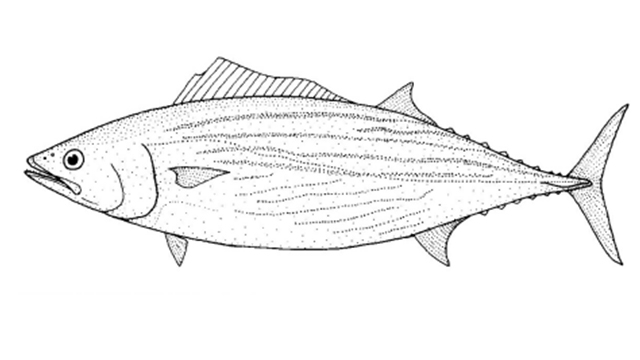 The Australian bonito, horse mackerel or little bonito, Sarda australis is a fish of the family Scombridae and is found in eastern Australia and New Zealand. They swim at depths reaching depths of approximately 30 m (98 ft), in open water. Its length is commonly at around 40–45 centimetres (16–18 in) fork length and 1.8–2.3 kilograms (4.0–5.1 lb) weight. Its maximum length and weight are about 100 centimetres (39 in) and 9.4 kilograms (21 lb), respectively.

Mouth moderately large. Interpelvic process small and bifid. Swim bladder absent. Laminae of olfactory rosette 21 to 39. Spleen large and prominent in lateral view. Liver with elongate left and right lobes and a short middle lobe. Body completely covered with very small scales posterior to the corselet. Dorsal stripe closer to being horizontal than in other species of Sarda and extending up to the belly in some specimens. 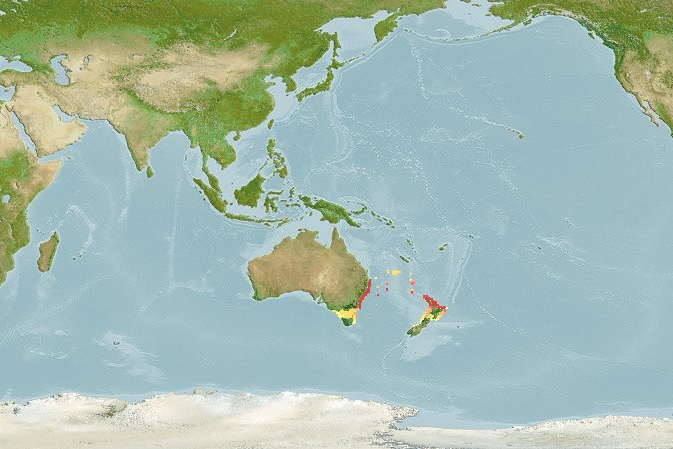 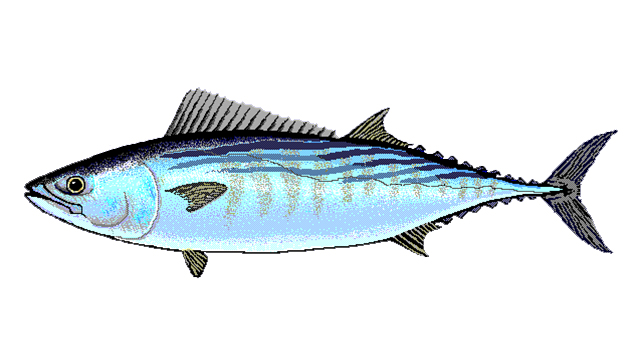 Pacific bonito, Sarda lineolata, is a marine species of bonito that is a game fighter but not highly thought of as a food fish. While it has been considered to be a subspecies of Sarda chiliensis, recent treatments recognize it as a species, S. lineolata.

It is colored blue to violet above, with metallic luster becoming silvery ventrally. It has ten or eleven stripes on its back running obliquely from the dorsum forward, and fifteen or more rakers below the angle on the first gill. The first dorsal fin is contiguous with the second and longer than the head. The caudal peduncle is slender, and the body entirely scaled. It has no teeth on the vomer. It has a small keel on either side of the median keel on the sides of the caudal peduncle, and six to eight finlets on the dorsal and ventral surfaces of the caudal peduncle. The maximum length is about 40 inches and weight 25 pounds. It is found anywhere from inshore to about 100 miles offshore from northern Vancouver Island to Mexico, though it is not normally found north of Point Conception. It usually travels in schools. Fish and squid are its main diet. It is caught by trolling and still fishing, using feather lures, spoons, or live bait. 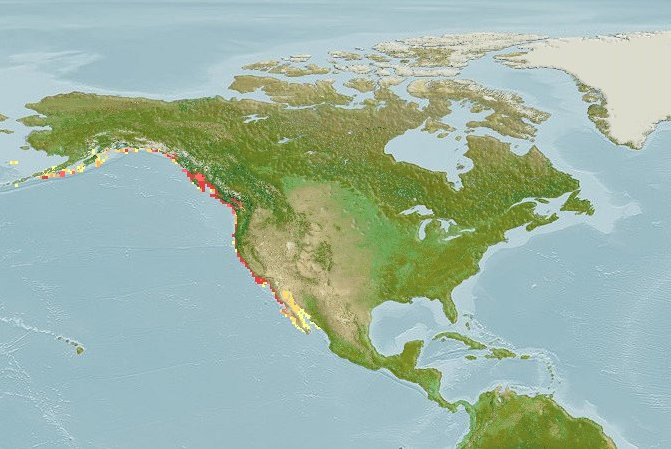 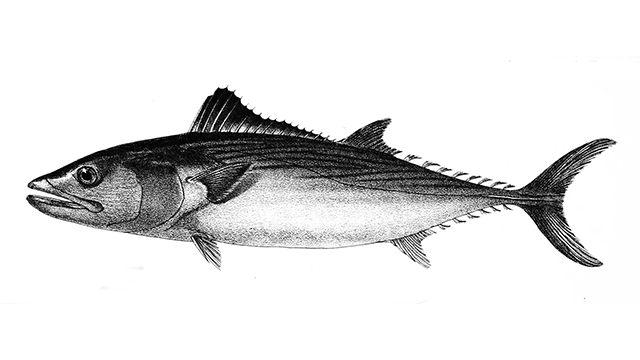 Southeast Pacific: northern Peru to Talcahuano, Chile (Ref. 9340). The northern subspecies Sarda chiliensis lineolata occurs from off the coast of Alaska, southward to Cabo San Lucas at the tip of Baja California, and in the Revillagigedo Islands. 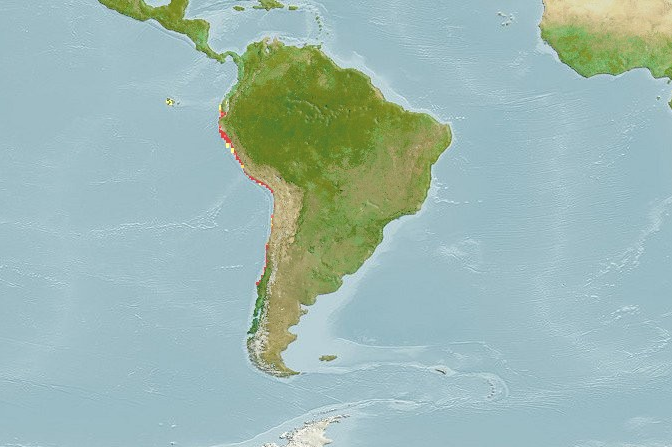 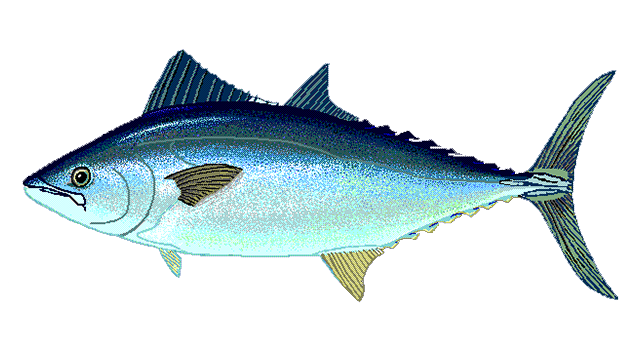 Orcynopsis unicolor (plain bonito) is a ray-finned, bony fish in the bonito tribe of the mackerel family (Scombridae).

Eastern Atlantic: Oslo, Norway south to Dakar, Senegal but the range is centered in the southern Mediterranean Sea. Not known from Madeira, the Canary Islands or Cape Verde. 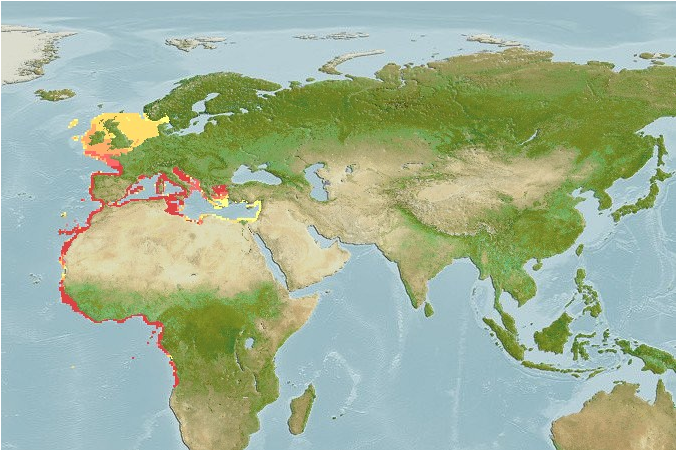 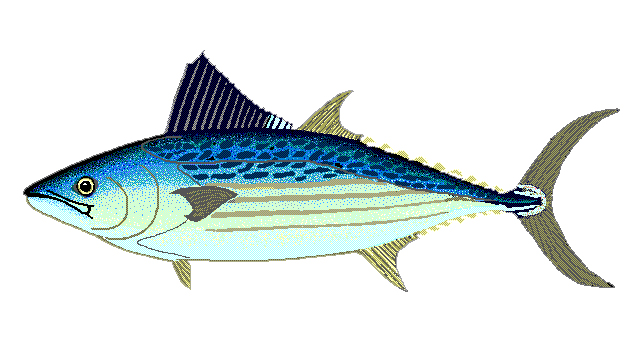 The leaping bonito (Cybiosarda elegans) is a species of saltwater finfish from the Scombridae (Mackerel) family. Scombridae includes such tribes as the mackerels, tunas, and bonitos – the latter of which, the Sardini tribe, this fish is a member. It is the only member of the genus Cybiosarda, which is therefore called a monotypic taxon. Since the bonitos and tunas are close relatives, this fish has variously been referred to by such other common names as Australian tuna, striped bonito, and Watson's bonito.

Western Pacific: restricted to the northern three quarters of Australia (absent from the south coast) and the southern coast of Papua New Guinea. 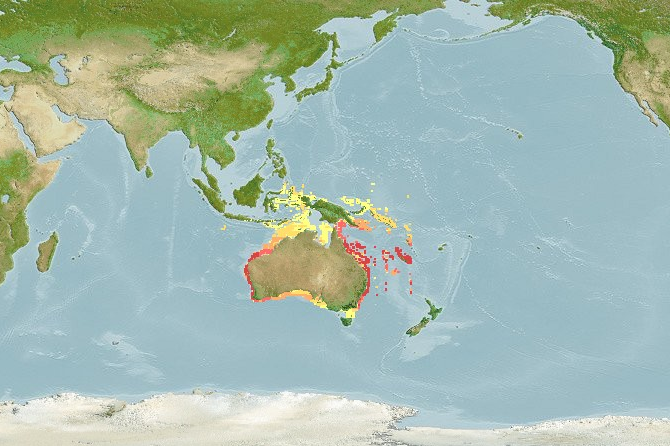 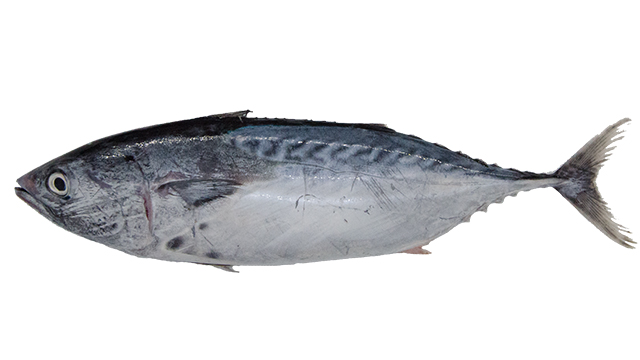 The frigate tuna or frigate mackerel, Auxis thazard, is a species of tuna, in the family Scombridae, found around the world in tropical oceans. The eastern pacific population is now regarded as a separate species by some authorities, Auxis brachydorax.

Back bluish, turning to deep purple or almost black on the head. A pattern of 15 or more narrow, oblique to nearly horizontal, dark wavy lines in scaleless area above lateral line. Belly white. Pectoral and pelvic fins purple, their inner sides black. Body robust, elongate and rounded. Teeth small and conical, in a single series. Pectoral fins short, but reaching past vertical line from anterior margin of scaleless area above corselet. A large single-pointed flap (interpelvic process) between pelvic fins. Body naked except for the corselet, which is well developed and narrow in its posterior part (no more than 5 scales wide under second dorsal-fin origin). A strong central keel on each side of caudal-fin base between 2 smaller keels .

Atlantic, Indian and Pacific (Western Central). Eastern Pacific population recognized as subspecies Auxis thazard brachydorax . Many authors have used the name Auxis thazard as including Auxis rochei in the belief that there was only a single worldwide species of Auxis.Highly migratory species. 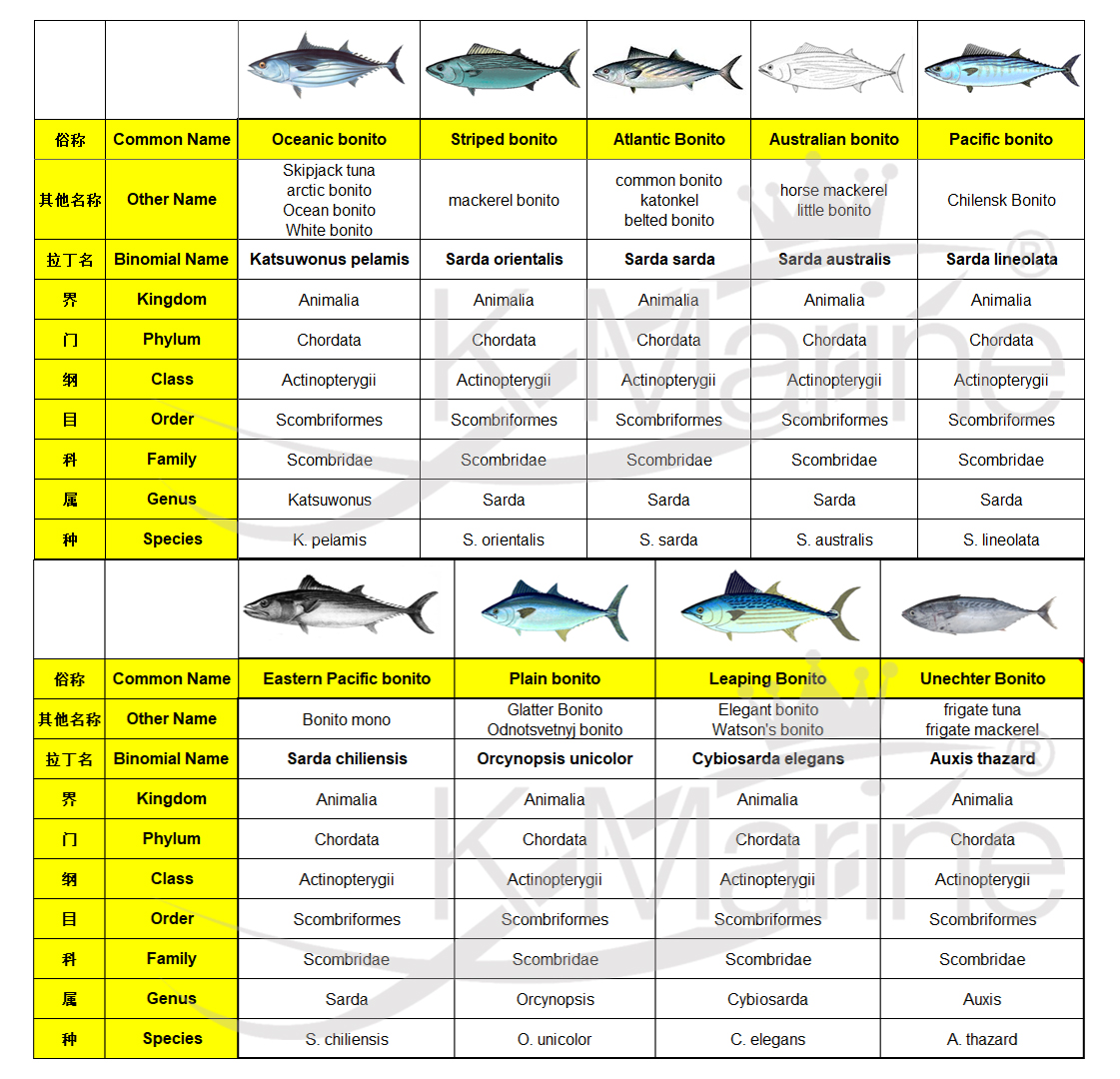 Did you read the above description and learn more about bonito? Remember that Latin Name is the unique name. The common name corresponding fish is not mentioned above in some countries and regions, here we just statistics compiled some people have relatively identity.

Welcome to leave messages to tell us what we did not mention or what you call the fish in different name at your side, waiting for you to share.