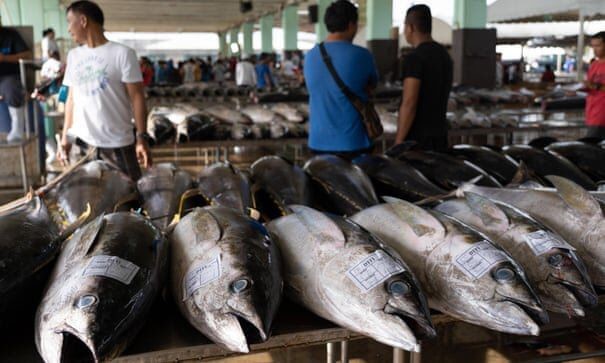 Scientists have warned that existing levels of tuna fishing are unsustainable after researchers found that global catches have increased more than 1,000% over the past 60 years.

A study in the journal Fisheries Research estimated that about 6m tonnes of tuna are now caught annually, a rate that “risks driving tuna populations to unsustainable levels and possible extinction”.

“Tuna fisheries have expanded into every region that we can possibly exploit. There are no new fishing grounds to explore and we are catching fish at the highest rate we can,” said Angie Coulter, a researcher with the Sea Around Us initiative at the University of British Columbia.

The global study is the first to estimate the volume of tuna taken out of the ocean, where the fish are being caught and the amount of bycatch – tuna caught unintentionally and discarded into the sea.

Booming demand for tinned fish since the second world war has fuelled a massive expansion of industrial fisheries, the study said. The researchers pointed out that technological advances such as mechanisation and refrigeration have hugely increased the capacity to fish, driving enormous overfishing.

The decline of tuna populations could threaten food supply chains and jobs around the world, as well as potentially destabilising the underwater food web, Coulter said. “Tuna are both predators and prey. They eat smaller fish and invertebrates and are a food source for larger marine life, such as sharks and whales.

“If we lose tuna due to overexploitation, we break those links in the food web and disrupt the function of the ecosystem. This means that the survival of other species in the ecosystem is also threatened,” she said.

“Unlike tuna, sharks take many years to mature and do not produce many offspring,” said Coulter. “This makes their populations particularly vulnerable to these fishing pressures. And the worst part is that many of these sharks are not brought to land so their meat can be used as food. They have their fins removed and [are] sold in shark fin markets, or are simply thrown overboard as discards.”