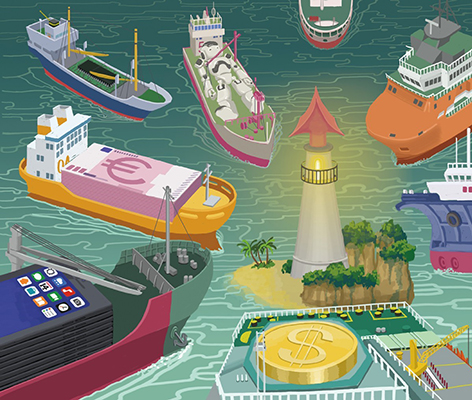 Slowdown-what slowdown? That might well be the stance of foreign companies operating in China, if asked about the implications of slowing economic growth for the future of their businesses in the country, and the attendant concerns about it.

Some of the world's biggest corporate names such as Walmart, BASF, Exxon-Mobil, Procter & Gamble, Saudi Aramco, BMW, Cargill, ABB, Tesla and GE are all renewing their commitment to China by expanding their operations countrywide, never mind the sense of uncertainty sparked by the China-US trade dispute.

Such is their confidence in the bright future of the Chinese economy that their operations are in full swing day and night. Perhaps, nowhere is this more evident than at Walmart's South China perishable goods distribution center in Dongguan, Guangdong province.

There, well past a midnight during a weekend, Walmart staff busily pick and load goods in an orderly manner. After one or two hours, the trucks equipped with refrigeration and monitoring functions set off, laden with fresh vegetables, meat, fruits and dairy products.

The goods will travel from Dongguan's Shatian town to over 100 Walmart stores across Guangdong province and Guangxi Zhuang autonomous region-two geographies that boast consumers with a strong preference for fresh goods.

The US retail chain invested 700 million yuan ($99.1 million) on this distribution facility. Walmart plans to invest a further 8 billion yuan in logistics and supply chains in China over the next two decades. In the pipeline are more distribution and support facilities that will boost its supply chain capacity.

Data from Guangdong's Provincial Commerce Department show that the province alone saw a 61-percent growth in foreign investment to $11.08 billion in the first half of this year.

From preparing for factory construction to intensifying activities in the field of research and development, global companies have been accelerating the expansion of their operations across China in recent years, said Chu Shijia, director-general of the comprehensive department at the Ministry of Commerce.

He said many opportunities come from China's move to encourage foreign companies to expand their market presence in areas such as advanced manufacturing, high-tech, modern agriculture and services. China is also offering easier market access and creating a more fair, transparent and predictable environment for foreign businesses.

As for the northeast region, Saudi Arabian Oil Co, or Aramco, the world's largest oil producer by revenue, announced in February that it would invest $10 billion to build a fully integrated refining and petrochemical complex in Panjin, Liaoning province.

Part of the reason for foreign companies' almost exuberant existence in China can be traced to the country's trade development via the Belt and Road Initiative, which augmented demand. The BRI also helped create room for global companies to ship more products manufactured in China to other parts of the world.

This they did by making new investments and exporting technologies, said Wei Jianguo, vice-president of the China Center for International Economic Exchanges in Beijing.

Agreed Marcel Smits, head of corporate strategy at US agribusiness giant Cargill Inc. He noted that China's business environment continues to improve, and government policy is sending favorable signals. China's Foreign Investment Law, which was enacted earlier this year during the top legislature's annual sessions, will better protect the operations of overseas businesses in the country, he said.

Cargill invested $200 million in the first half of this year to build new plants and research facilities in different provinces of China.

Despite the ongoing Sino-US trade dispute, the Ministry of Commerce announced earlier this month that the inflow of foreign direct investment into the Chinese mainland rose 7.3 percent year-on-year to 533.14 billion yuan between January and July. This is yet another proof of foreign companies' positive response to the Chinese government's opening-up and liberalization measures.

New growth momentum has also been created by plans to establish six new pilot free trade zones and the release of two shortened negative lists for foreign investment. These are expected to allow access to more industrial sectors, said Lu Ming, vice-dean at the Academy of China Council for the Promotion of International Trade in Beijing.

In the past seven months, 24,050 new foreign-funded enterprises started operations in China, according to the ministry.

With China witnessing consumption upgrade and industrial upgrade, foreign investment in high-tech industries rose 43 percent year-on-year in the first half of this year, accounting for more than 29 percent of the total FDI. The high-tech services sector received 97.4 billion yuan in FDI, up more than 63 percent.

Zhang Zhiqiang, managing director of ABB China, said the company expanded its production base in Xiamen, Fujian province, and built a $150 million robotics factory under the theme of robots make robots in Shanghai. ABB is now investing more in software applications, artificial intelligence, human resources and in building partnerships with both Chinese and global companies across the country, he said.

"China has invested heavily in industries like smart manufacturing, artificial intelligence, robotics and clean energy, which are at the forefront of the world. This is certainly an opportunity for us, but also means a challenge. Because our competitors are also doing the same, we need to figure out how we can keep up or get ahead in this competitive environment."

Zhang said the Swiss company will deploy more resources and software engineers in both industrial and service robot development and production in China as rapid industrial growth and frenetic urbanization have prompted labor-intensive industries to find new ways of coping with increased demand, especially in automotive and mining sectors.

Eager to seize more share in China's new energy vehicle market, California-based Tesla Inc is expected to establish a $7.3 billion manufacturing facility in Shanghai, its first such plant outside the US. The Shanghai plant will start operations by the end of this year. It is also the first global automaker to benefit from China's revised policy announced in April 2018, allowing foreign carmakers to set up wholly-owned subsidiaries in China.

Another factor boosting MNCs' confidence in China is the establishment of more intellectual property rights courts at both central and provincial levels since the beginning of this year. Experts have hailed this move as a notable step to protect IP rights.

By constantly deepening reform in free trade zones, reforming and streamlining regulations on foreign investment, and adopting a service-provider level of awareness, the Chinese government has given strong support to foreign companies to develop in its market, said Rachel Duan, president and CEO of GE Global Growth Markets.

GE announced in July that it will open a new factory at Jieyang's offshore wind cluster. It will also establish a new operations and development center in Guangzhou, Guangdong province. Its new offshore wind factory in Jieyang will help meet China's growing demand for offshore wind energy and will serve both domestic and the Asia-Pacific regional markets.

Zhang Xiaofan, a partner at Deloitte's global Chinese services group, said trade tensions between China and the US will not force any country or region to replace China's position as a key player in the global supply chain, though neighboring countries such as Vietnam and Thailand have already initiated their moves to entice more foreign investment to their shores.

Because of its members' different cultures, currencies and political systems, the Association of Southeast Asian Nations cannot match China's size as a huge consumption market. Nor can ASEAN members muster as many policy, institutional and infrastructural advantages as China to fine-tune economic structures and fend off potential financial risks, Zhang said.

FDI from the European Union rose 18.3 percent year-on-year, while FDI from countries participating in the BRI grew by 5 percent.